Below are articles scanned in from various sources, from Anchorage Times to articles from "The Thlinget" and older news paper from the 80's with articles from the early years of the ANB/ANS.

When clicking on "Open Brochure" a new window will appear. From that window you may download, or view the document. While in Viewing Mode to zoom in, all you have to do is click on the image of the document.

Dating the quest for a Land Claims Settlement

Origin of the Land Claim Movement 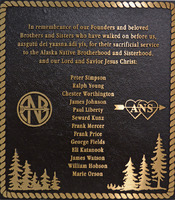 The ANB was patterned after the non-Native fraternal organization known as the Arctic Brotherhood, a formal fishing union that strenuously lobbied the U.S. government for Alaskan congressional representation. Local ANB chapters called "camps" were located in various Native communities, guided by a central organizational and communications hub known as the Grand Camp that kept ANB delegates in regular contact and informed of political occurrences. Members held an annual convention of all the camps each November. Despite its nonsectarian approach, the ANB officers maintained a close relationship with the Presbyterian Sheldon Jackson school.

The U.S. government during this period considered Native people to be wards of the state. This prompted ANB leaders to fight for citizenship and its attendant rights. As the ANB grew in popularity, its leaders became increasingly convinced of the organization's influence over Alaskan politics. In 1921, ANB representative William Paul attempted to convince officials in Washington to prohibit fish traps from narrow bays and channels in Alaska.

Although Paul's request was ignored, his appearance informed federal officials that the ANB was the political voice for Native Alaskans. The ANB continued lobbying federal officials to grant Alaska Natives full citizenship status, and, in 1924, the U.S. government acquiesced, subsequently passing the Indian Citizenship Act. Following the ANB's attainment of Alaskan Indian enfranchisement, the Brotherhood attempted to extend its influence by subsequently working with both Native and non-Native labor leaders, eventually establishing itself as an influential labor union and bargaining agent. By the mid-1920s, the ANB represented Alaskans Native in both political and labor matters. Buoyed by support resulting from the distribution of the ANB journal, the Alaska Fisherman(established 1924), the ANB would remain an influential bargaining agent and labor force into the 1940s. Toward the end of the 1920s, ANB leaders denounced as discriminatory a recent announcement by the federal government that a single school system would be established for Native Americans. In 1929, William Paul successfully argued in court that Native parents had the right to send their children to the school of their choice. The attempt to dispose of separate Indian schools and to compel the federal government to recognize Native people as citizens was an ANB strategy designed to wrest from government control the direction of their lives. The ANB also announced its intention in 1929 to recover Tlingit land by joining forces with the Haidas to pursue a land claim settlement against the U.S. government. The ANB refined its political strategy at each of its subsequent five annual conventions, while persistently lobbying federal officials for change. The U.S. government eventually gave in and passed the Tlingit and Haida Jurisdictional Act of 15 June 1935, enabling the Tlingits and Haidas to initiate their land claim against the government and the U.S. Court of Claims.

During this period, the ANB returned to the Tlingit heritage they had suppressed since the organization's inception in 1912. Both the Tlingit language and the potlatch were reintegrated into the ANB philosophy in an effort to grow and stregthen the organization.

The following year, the federal government extended the Indian Reorganization Act (IRA) to Alaska (1936), enabling the formation of tribal governments at the village level. The ANB supported the IRA, a popular move that further strengthened its political resolve.

As the ANB grew in popularity, the Brotherhood became involved in issues beyond labor activism and its desire to ensure Native incorporation.

In 1929, an ANB Grand Officer was refused access to the main level of a movie theater in Juneau. Informed that he would have to sit in the Native section of the balcony, he brought his complaint to the ANB. A similar event occurred a few years later when a group of Natives caused damage to an ice-cream parlor after being refused admission. The goal was to have their case heard publicly in court. Following these two high-profile events, the ANB aggressively lobbied the Alaska Territorial Legislature for change, and, in 1946, an antidiscrimination law was passed. Despite claiming these impressive political accomplishments, the ANB created the Tlingit-Haida Central Council (THCC) in the 1940s. The THCC was the legal organization established by the ANB to pursue the land claim, since anyone in Alaska could join the ANB. Despite the separate mandates (the ANB specialized in community activism, while the THCC took over more formal governmental duties), the two organizations continued to work together and share leadership at many levels.

The money raised was used for a variety of other purposes, which included hiring a lawyer to defend a Native man convicted of violating fishing laws in the early 1950s. 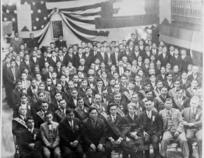 The Sword and the Shield

Alaska Business article on occasion of 100 years of ANB

Image is from historic copy of The Voice of Brotherhood

William and his brother Louis Paul (1887–1956) are considered foundational members of the Alaska Native Brotherhood (ANB) and in the 1920s extended its presence to every Native village in Southeast Alaska. The organization pressed for voting rights, desegregation, and social services, as well as advancing the first Tlingit and Haida land claims in Alaska. William Paul served several times as the ANB's Grand President and Grand Secretary.  Here is an excellent exerpt describing William in the conext of his times on issues as diverse as "voting rights and fish traps".